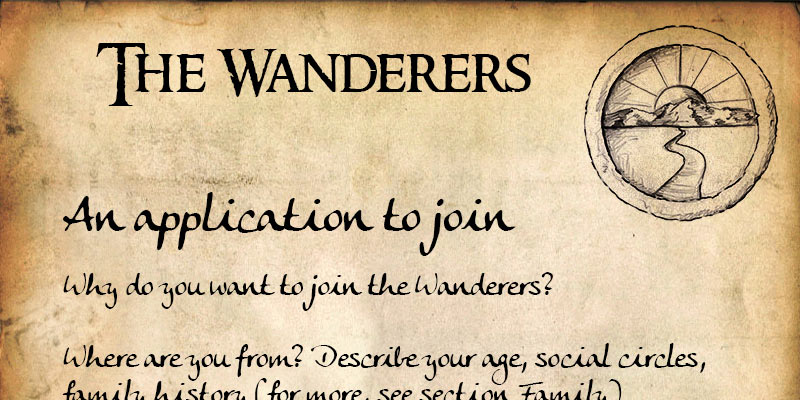 For years, I started campaigns by wrangling my friends into playing, having them quickly roll up characters, and jumping on the dark and mysterious road. There were always growing pains and some people who never moved beyond a character who hacked their way through every adventure. I always wanted the players to jump into the world more. And then I read about Zero Sessions.

A Zero Session is like making an outline for a fictional book, except it is done cooperatively—much like how I would think planning for a TV show or movie trilogy might go. The Game Master gives the setting and the base idea and lets their fellow storytellers build on that. In Dark Return, we have the Wanderers, which is the adventurer’s guild. I have each new player fill out an application for the adventurers guild, which gives a starting point for both the players and the GM.

Here is the adventurer’s application I give to all my players:

Application to the Wanderers, an Adventurer’s Guild

Why do you want to join the Wanderers?

Where are you from? Describe your age, social circles, family history (for more, see section Family).

If you had to describe yourself in three words, what would it be?

Describe two people who have had a big influence on you.

Describe one place that is very important to you.

What is your family background?

Are you still close with them?

Do you have any childhood friends?

Are you still close with them?

Have you had any previous adventures?

It obviously gives me, as the Game Master, a place to start. It also gives the players time to work out a back story and find out how they fit into the world and work with the other adventurers. Sometimes the worst surprise when setting up a campaign was what a player had decided they wanted when they were making their super-detailed character at home. This lets everyone craft the start together. This gives the players some buy-in to the world and campaign from the start.

I also always want the players to define one locale of the starting location. Everyone has a favorite haunt in their hometown or at least a place they have a story around. This creates a place for the character in the world. It also gives us GMs fodder for future encounters.

This little bit of paper, a night of a few beers, and discussion has always led to a better campaign. I hope it helps you build a better start to your own campaigns.