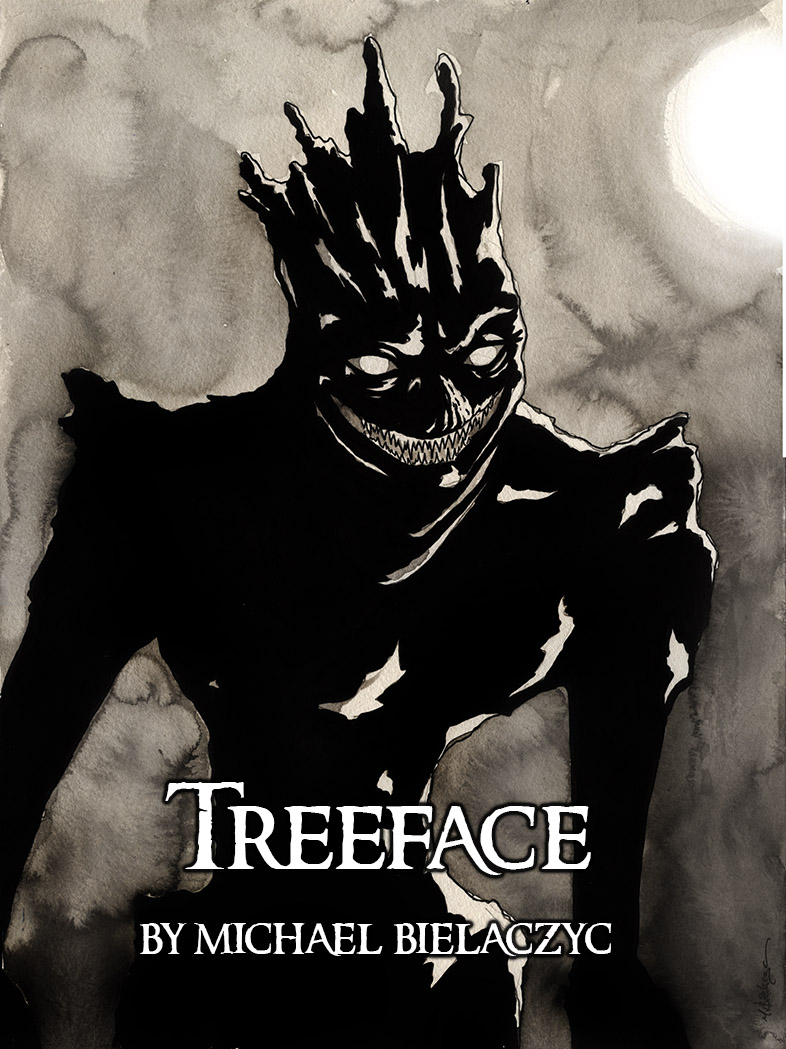 The following short story was written by Michael Bielaczyc in celebration Halloween. It is a dark tale of terror set in the mythical world of Uteria.

Leave a bowl of milk out, and the crust of the bread.

That’s all it takes, according to the stories—all it takes to keep it away. Those in the village laugh; city dwellers think it is backwoods ignorance. But they don’t live on the forest’s edge. When the sun sinks behind the great trees and the mist hangs low, things begin to stir. Some may say it is just fireflies and raccoons, but those who live next to the forest know. They know what lurks there . . . what comes out at night to peer through the shadows at the warmth flowing from cracked windows.

Here, we call the thing Treeface. A funny name, I know—something those who live behind comfy city walls would tell jokes of. But when you see its pale eyes peering out from the forest; when its long limbs reach out of the murky shadows; when you see your flock torn to pieces in the morning, then the laughs stop.

I saw him more than once, sadly. First time was up by the Shadara farm. I was late coming back from the Wood’s Tap, my mind addled by a few too many ales. The night was cool, as it always seems to be these days. The Shadara farm is in a crook of the forest, the tall trees hanging over its fields and pastures. I was leaning against a hard gray stone wall, enjoying the stars above. Isn’t it funny that whenever it is coldest and most uncomfortable that the stars are the most beautiful?

And while I leaned there, my head craned up to the heavens, I heard it. It sounded like two stones being ground together, the pitch enough to make your skin crawl. I turned, looking down the hill, and there it was. It would be hard to describe even if I had imbibed a few less mugs, but I will try nonetheless.

Under those clear stars, its limbs held a motionless goat, which it brought slowly to it’s mouth. While one might say that is it built like a man, it is built in the way that dreams often begin—in those moments when you are between sleep and nightmare, when the world stretches out and things seem a bit off. That is where it belongs. Even though it may stand nine feet tall, its arms could easily reach the ground. Four long taloned fingers protrude from its knobby hands, here in the starlight glistening with blood. Its large head, hanging heavy between its shoulders on a vulture’s neck, descended into the goat and came away stringy with meat. I shuffled, a step between running and falling, and a stray stone fell from the wall. Treeface stopped and looked my way. Its small blank eyes saw me, and I swear it smiled. Then with a swift turn it strode into the forest on its back bent legs and disappeared.

And after that night I put out my offerings each dusk: a bowl of milk and a crust of bread to keep Treeface away. Or at least that’s what the old songs say.

I would drink nightly at the Wood’s Tap, and I would hear stories about the creature. Missing cows, sheep with their skin missing. I heard excuses—wolves, thieves, even witches. But I knew. Each morning, the crust was gone and the bowl was empty, and my old cow and small herd of goats were untouched.

I smiled when I heard the stories, so smug in my confidence. My little bit of milk and bread were a shield between me and the damned. Each night, it was the same ritual: eat my meal, peel back the crust, pour out the last bit of the day’s milk, and sleep all night in the warm bosom of safety.

Until that night . . . the night when that little demon changed everything. It had been useful. It had shown up a few days before, slinking around the barn, jumping up into my window sill. I allowed it. Its golden eyes seemed kind. One day it even brought me the corpse of the rat who had plagued my grain stores. But that night I warmed up to it too much. I gave it food at my table and water by my hearth. It was curled up there when I laid out my bread and milk. I curled up in my own bed, the fire lulling me to early sleep on the cold, autumn night. I awoke in the chill as the little demon jumped onto my chest, purring and kneading its claws through my thin blanket. I allowed it, pulling my arms out of the warmth of the covers to pet its multicolored fur. It was then that I saw the window shutters open. I sprang from the bed, but I knew it was too late. I opened the door and saw the empty bowl, the crust nibbled to little more than a few crumbs. The little demon wove itself between my legs, thinking this was some new game.

My mind raced.  It was the last of the milk, but maybe I could get a little more if I was quick enough. I ran to the barn. My feet were cut as rocks and twigs dug into the skin, but in my panic, I barely noticed. Little demon chased after me, his golden eyes sparkling in the moonlight. He jumped up onto a hay bale as I ran to Megda’s pen. It had been long enough, I thought; she should have enough for a bowl full of milk. . . .

Little demon hissed at something, and my heart sank. Too late, I thought. Little demon ran up into the loft and I turned to the doorway. There it was.

The two moons gave it shadows of crimson and blue as it strode across the space between the barn and the house. Two of my goats hung limply from its long arms as it dragged them, leaving dark trails in the dirt. The creature shook them, spraying splatters of dark liquid on the sides of my house. It dropped the goats in a dull puff of dust and reached one long, taloned finger to push my front door open. I found myself huddled between two bales of hay, milking Megda a distant memory. I peeked out into the nightmarish scene from a crack between the wooden walls of the barn.

Treeface ducked its head into the house, its neck so long that its body remained outside. I thought of running, but that idea flickered away as it turned toward the barn. Once again, I saw it smile. It turned and slowly made its way toward me. Megda mooed and slammed against her pen walls. I slunk deeper in between the hay. The pen walls did not give way, a testament to my ability as a carpenter, but in this instance it horrified me that she could not escape. It was quick. Megda made some awkward noise as Treeface tore her in half. The sound, like wet cloth being torn, numbed me, and her blood rained down as Treeface swung around her corpse. I heard a hiss and scuffling from the loft as the little demon sought her own escape. I sat there, soaked in blood, waiting for Treeface to find me. As I looked up through the hay bales I noticed the stars through the slats of the barn roof. Here in this instance, my life falling to pieces, the stars did not change. They sat there, sparkling in the night sky, unconcerned over my predicament.

It was then that a clawed hand wrapped around the haybale to my side. With barely a flick it was tossed into the far corner, and my hiding place was exposed. Treeface’s large head blocked out the stars; even they could not save me from this moment. Its white, wormlike skin peeled back in another smile. This time, I could see the translucent needle-like teeth that filled its mouth. Its eyes, for a moment, filled with pleasure, though their blank white color did not change. A long snaking finger inched forward. I could not move, had I enough sense to want to. A yellowed nail pierced the skin of my cheek, and I felt it pull as it dragged through my skin. I sat frozen.

With a hiss and blur of fur, little demon jumped down clawing into Treeface’s shoulder. A small bit of pride welled up in me, then fear. I did not want to see it. I knew what was to come. Treeface’s large hand came up and enveloped the small cat, pulling it from its shoulder and pinning it down on the hay bale nearby. Hissing and spitting, little demon did not stop fighting. Treeface looked down at me, his face splitting into another sick grin. I tried. I really tried to reach up and stop it, but I couldn’t. My fear held me. The ache of it sat in the pit of my stomach and dragged me down deeper into the dirt and loose hay. Treeface leaned in, its small, wet nostrils flaring, seemingly inhaling my dread. Then, strangely, it reached down and almost caressed my forehead. It let go of little demon, who ran off into some dark corner.

And then it was gone.

The stars above twinkled softly, unconcerned of what happens below.

I sat there, covered in the blood, cold, alone, and shaken. A crackling noise turned my head back to my house, and I saw the roof had been pushed in and was ablaze. Around dawn, I finally gained the courage to stand and stumble out from the barn. Little was left of my house, save the stones that made up half the walls and the hearth. Around my ankles, little demon wove and purred.

After that night, I sold my farm. And honestly, I drank the profits. I thought of Treeface. I had never heard of him killing a person. Maybe the fear was all he needed; a fear that would live with me forever.

Now I sit here in the gutters of Ferryport, this little furry demon still at my side. You have heard my whole story. So can’t you spare a copper dime?