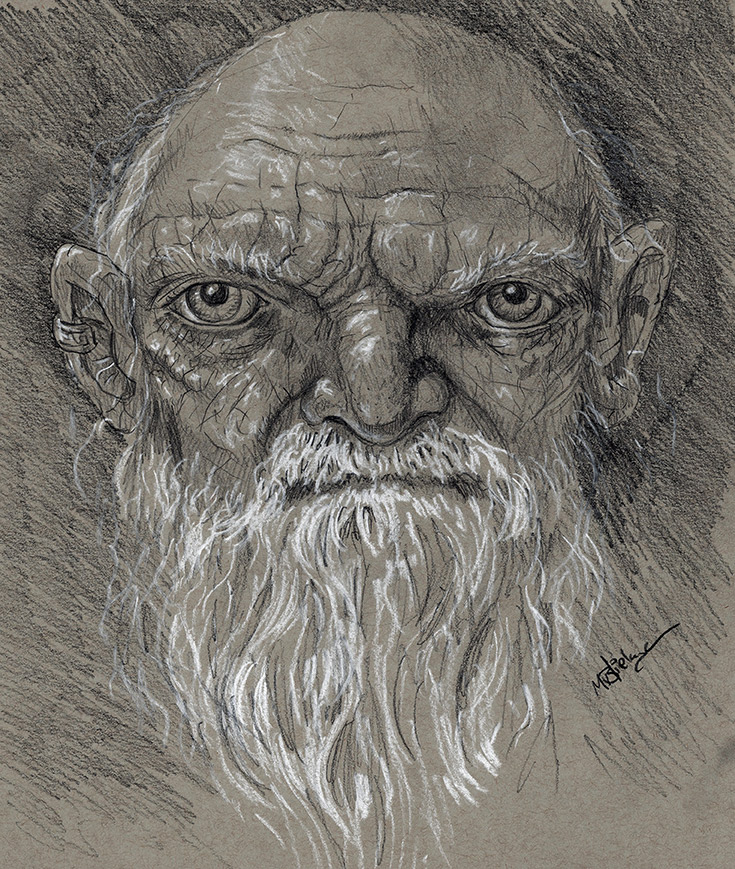 “Out with it,” barked the wizened old dwarf. Erl’s leather face shifted into a smile and he slapped Gartnor on the back with a stinging but friendly force. “The faster you ’splain what you want, the faster we can guzzle that pitcher.”

“Not here to drink, he says,” announced Erl to the raucous score of dwarves occupying the tavern. As hands wiped foam from ale-stained beards, their eyes turned suspiciously to Gartnor. “Not here to drink! Bwaah!” The group erupted in laughter. “Listen, lad, you don’t know our ways, so I’m going to tell ye. You come to us to ask a question. A question begs an answer. An answer is a favor. A favor is either returned, or it’s settled by the bond of drink. So you’ll ask, I’ll answer, and we’ll drink.”

“You keep calling me lad,” interrupted Gartnor. “I have lived for fifty-four cycles.”

“And I for one-hundred and eighty-seven. So if ya don’t mind, I’ll call ye lad. Now listen, because I’m goin’ to teach ye some more about being polite to a score of dwarves. You never drink and run off, lad. No, you drink, and you hear our jokes, because they’re damn funny, aren’t they?” He addressed the question to the room, and was answered by a chorus of riotous cheers. “And then, once we’re spent, and the jokes are all told, we rest our weary hearts, minds, and bodies, with a little smoke of the pipe weed. We tell stories of dead heroes, and we might have us a cry. Only then, lad, do ye part ways from a company of dwarves. Understand?”

Gartnor’s eyes darted toward the door. “You know, I think I’ll just…”

The sentence trailed off as the room became quiet. “Nay, lad, you won’t. You see, you’ve already taken our time. You’ve gotten us curious. We’ll hear what you have to ask, and you’ll be polite. Ye’ll show us some courtesy, and when the sun is down and we’ve got tired in our bones, you’ll walk that pretty face back to the friends you have waitin’ in the inn. Now, ask.”

“I’m looking for something. I spent my life trying to track down an artifact. It was a family heirloom—before an ancestor lost it. I’ve tracked it to some agreement, four generations ago. A trade. It went to a company of dwarves around this area. I was hoping you could help me find it, and if someone still owns it, to negotiate the terms of its return.”

“So you want to reverse a trade? Let me tell ya another thing about dwarven manners…”

“It was our ancestors who made this deal. I’m not reversing. I’m asking for a new arrangement.”

“And that’s how it works with you people, eh? If it wasn’t you, then a deal means nothing? Obligations don’t pass to kin, eh? Honor en’t taught? What was this artifact?”

“Is your ancestor called Duglan?”

“It wasn’t my ancestor who made this deal, lad. Old Duglan traded with me. Your grandpops was toddling…couldn’ta been more’n two cycles. Your great grandpops was trying to get through the mountains with this toddler; somethin’ was huntin’ them. They were terrified, ya see. They came across us, and they begged us for help. We asked what they had for trade, and all they had was this jug.” He put his hand on the large, clay pitcher they had been drinking from. “So we took it for payment, and we saved your grandpop’s wee life, so that he could live to make the person that made you, so that you could come here today and show us this disrespect.”

“You never mean!” After a long silence, the room burst into laughter. Again, the dwarf smacked Gartnor’s back, stinging the same spot as before. “The answer is no. We like this jug. My guess is you’re going to say there’s somethin’ magical about the old thing, and I wouldn’t be surprised. All the more reason to keep it.

“Now, I answered your question. The favor is done. You have nothing on you to return that favor, unless you want to walk out of here naked.” Gartnor shook his head. “Good. That’s the right answer.” A mug was shoved into his chest, spilling down his shirt, and he put his hands around it. “Drink!”

Gartnor took a drink, and was surprised to find it was the best malted ale he had tasted. Immediately, a good humor infused his body. “Ya see, now, lad, it’s not all so bad. No need for disappointment. Drink!” As he took another draught, Erl’s hand pushed up the cup, spilling liquid down Gartnor’s cheeks and forcing him to chug faster as he was cheered by the crowd.

“Now sit down. Listen, lad, what do ya call an elf who marries a thundrom?”