Engaging everyone at the table can be hard. This month I wanted to challenge my players as they snuck across the landscape near the city of Kowal, trying to escape the infamous Red Guard. But how would I make this challenging and interesting for the whole table?

First I put in an environmental challenge. A large river blocked their path. Sure they could swim across, but then all their gear would be wet, books ruined, and maybe even losing some items. I didn’t have a solution, I just wanted to see how they would react. I gave them another option, they could travel an extra 3 hours to the nearby bridge, but that had a keep, which might be filled the Red Guard soldiers. Also, they had some children and hurt mages in tow, and could they make it?

As usual, they figured it out, building a quick raft and Daz using his transformation ability to become a “fishman”. Daz jumped in the river and pulled the raft across the wide river. Environmental challenge complete.

But after that they had to sneak across open farmlands. To build tension I wanted to create a skill challenge. I wrote down the following in my adventure notes:
Staying Hidden
One character survival, dc20 find the path. One character awareness d20, spot any guards. One character thievery dc30, staying hidden and covering tracks. One character athletics DC 20, keep everyone moving. Other players can roll vs dc15, anything above 15 they can add to other player rolls.

Soldier units combing the countryside. Groups of 4 level 2 Fighters. Encounter if any above rolls fail.

It worked out great. Everyone got to do skill checks based on what their character specialized in, but even better, those who didn’t have a main roll, still could roll and contribute. It added tension, and showcased the player’s abilities. If it was longer than a couple of hours, I might have even made them do a second roll, but this time, you couldn’t test the same skill. So the rogue would have to try awareness and someone whose thievery was second best got to try their hand at it!

This month we released the Sanity Rules add on, a book dealing with the dark horrors of Atheles and how characters can cope with it. 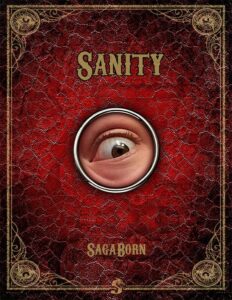 A set of mental damage rules for your tabletop d20 game.
Sanity rules in SagaBorn attempt to simulate the inner workings of a character’s mind as they deal with the strange world of Atheles.

There are two reasons we think this is an important addition to the SagaBorn core game. First is to illustrate the difficulties in the characters’ minds of the characters as they encounter with the bizarre and often terrible things happening around them. The first time the undead rise up to fight might be a mind-numbing event, not just a combat encounter. Or, opening and reading a Grim Mortis warps the character’s perspective of the universe. Thus, keeping track of sanity becomes a scale trying to balance a sane mind amidst the horrors that Atheles contains.

The second is to add consequences to overt violence. We don’t have alignments in SagaBorn, but acts of unwarranted violence are considered evil. When one commits these acts, they erode the barriers that separate them them from being more than brutish animals. In a tabletop game where we are simplifying a complex world into a world built on numeric formulas, these rules will allow players to have their characters deal with the loss of compassion and understanding.

We are working hard on the SagaBorn Battles skirmish game. This is a card based game that uses miniatures you already own! We are currently in the end of alpha stage and are looking for playtesters. Help us playtest by joining the Relic Hunters Club.

It is an easy game to pick up and play, for 2 people with an average 30 minute playtime.

The Path of Two: The Temple of the Valley

The second official Sagaborn adventure is coming out soon. It takes the players into the wilds of the Eastlands as they discover an ancient Eldar Temple.

Visit the Dark Return website to learn about Mort, a dwarven mercenary NPC. 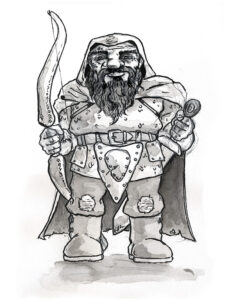 That’s all for this month!

Thanks and Keep Adventuring!
Mike