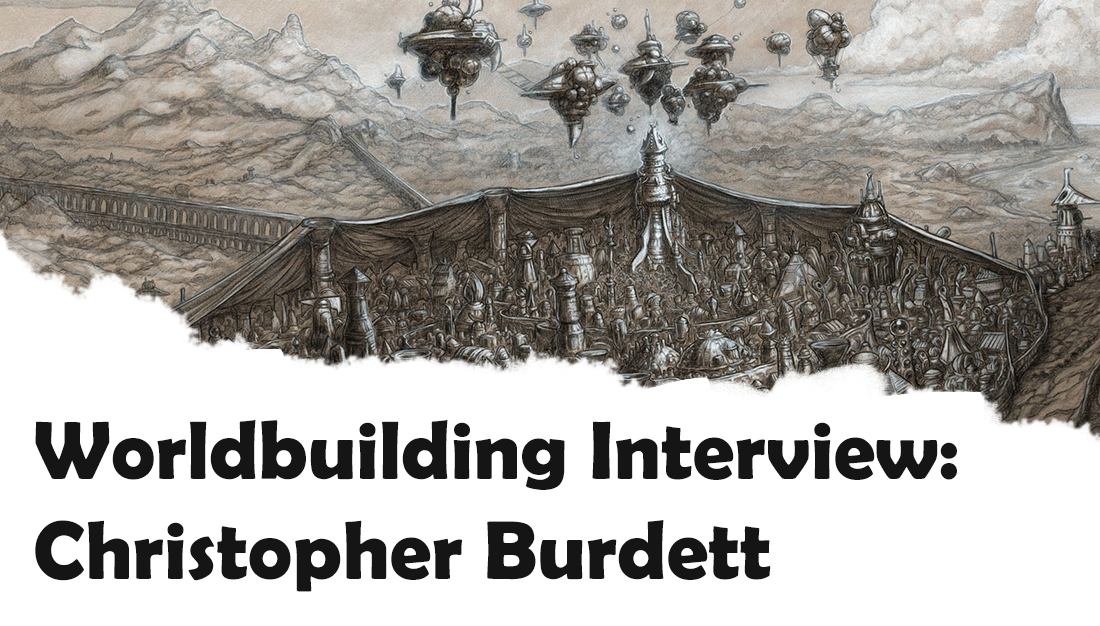 Christopher Burdett is an artist known for many things, Magic the Gathering, Star Wars, and Buffy the Vampire Slayer being but a few. Not to mention his amazing contributions to SagaBorn over the years. To me, he is one of my favorite artists and people I have met in my professional career. He is so full of happy energy and talent that I covet any moment we have to sit down together and discuss creativity. These last few years he has been working on his own world with the Grand Bazaar of Ethra VanDalia. He graciously shared some time to answer some worldbuilding questions I had for him.

How did the Grand Bazaar originally come into being?
In 1998, while I was a student at Florida State University, I took many printmaking classes. During an etching class, I began working on a multi-technique piece that I worked on for a while as I used different etching styles to create a finished piece. The etching was of a dragon-like creature in its laboratory working on things both magical and mathematical. I named the character Ethra VanDalia. To this day, I am not sure what it was about this piece, but more and more ideas continued to come to me over the years that centered around this character and the world they lived in. I would put it all aside, but I would eventually return to it. In 2007 I redesigned Ethra for the first time and began fleshing out more and more of their world. In 2011 I created the first official piece of art set in the Grand Bazaar, and it featured two species that would eventually be seen in the first book, the Grynk and the Kiblorb. 2014 saw the first piece of art completed for the book. While these were sizable leaps of time, I was constantly thinking about this world, and more and more, I realized that the personal work I was creating was all connected to the Grand Bazaar of Ethra VanDalia.

Which is your favorite part of worldbuilding. Making a new species, defining a new location, or coming up with a new faction?
For me, worldbuilding is about the creatures that live in the world and their stories. I love to create questions that I then have to answer. Say you have an aquatic creature that is intelligent and has a vast and complex society – what do they think of those who walk the ground? What do they use as money? Do they even have money? What would drive them to war? What does their family structure look like? These answers, and more, can be found in the creation of their art, in the storytelling, or both. I think there is an improvisational aspect to my worldbuilding, a lot of ‘Yes, AND…’ going on when I am working. I also try to find unusual or at least unexpected directions for my monsters. 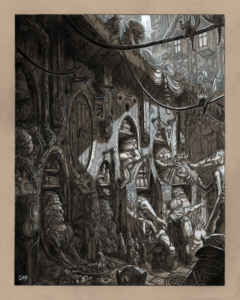 Since this issue is about Strongholds, if you lived in the Grand Bazaar, where would you set up shop, and what would your place look like?
The Grand Bazaar is ever-growing and ever-expanding. The older sections are cramped, crowded, and have seen thousands of years of life and commerce. There is barely room to walk the streets as, over the millennia, every cubit of space has been used for all its worth. Banners hang down from storefronts or draped on the many cables and cords that crisscross the streets. Street vendors vie for what little room there is in front of shops hoping to make a sale before they are chased away. The smells of food, perfumes, wood smoke, rotting garbage, and the musks of fifty species collide in the close air. In some areas, the buildings are so dense that entire blocks of buildings and stores have been enclosed to form megastructures as tall as towers and span many streets in every direction. Structures are built, rebuilt, torn down, and built again as layer upon layer of buildings forms organic warrens. The newer areas of the Grand Bazaar are much more open and have broad streets and tall new towers. But in the fullness of time, the new areas become part of the older areas, and the cycle continues as the Bazaar grows and expands.

You have worked for Star Wars, Dungeons and Dragons, and even TV like Buffy the Vampire Slayer. How have these worlds influenced your own?
Working on these other franchises has given me the time to grow and learn to be a better artist, worldbuilder, and storyteller. I learned to work to a schedule and deadline and how to be a professional artist. While working on them, I have grown my skillsets and developed what it is to be my art, not the art I am hired to make. I started working in television and movies in 1999, and when I started, I was barely a baby artist. I was not much more than another set of hands and a lot of enthusiasm and curiosity to learn. I needed a couple of decades to learn to be an artist and live my life and gain experience making art and being a person. I made many mistakes on all those other projects so that, hopefully, I will make less on mine. I try very hard not to let the worlds I made for others directly affect the Grand Bazaar. If anything, I try to channel how those projects made me feel and then figure out ways to create that same feeling in what I create. I have come up with ideas while doing design and concept work for Dungeons & Dragons that I never submitted and held onto because they were too good to let slip through my fingers. It can be hard to compartmentalize design languages and ideas, but that is why I needed to learn how to be an artist before writing and illustrating a novel. 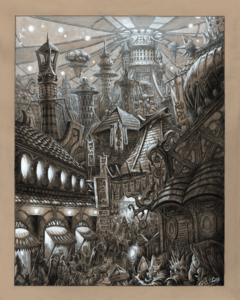 This is always a loaded question, but what piece is your favorite in the book?
That would be the book itself. All of the text and art would not mean as much if not pared and collected into the intended tome. That said, Hollow Alley and The Seated Dead pieces mean the most to me personally and are the pieces I think of when I think of the first book.

I always work with a lot of collaborators, do you have any with the Grand Bazaar?
I have my editor, Achsa Nute, my graphic designer, Steve Leacock, and my publisher, Jon Schindehette. Achsa saved me from myself, Steve took my ideas and knocked them out of the park, and Jon did all the heavy lifting of running the crowdfunding and production of the books. Without them, the book would have never gotten across the finish line and would be a pile of art and a manuscript sitting in my studio.

What sort of patron would be most interested in this book? Art and fiction? Or is there stuff for gamers as well?
First and foremost, The Grand Bazaar of Ethra VanDalia is a book of monsters and stories. It is an illustrated novel that collects anecdotes, research, letters, children’s rhymes, and much more to give you a multifaceted view of the world. Each monster entry is a chapter, and you are presented with at least six different points of view. Sometimes these views will align, and often they don’t, and it is up to you as the reader to make up your mind about the beings and events. Large and small narratives weave through the different entries as you are presented with your first introduction to the Grand Bazaar and the larger world beyond. Also, because of my lifelong love of Dungeons & Dragons, a 5th Edition D&D stats guide is available that gives you all the details to bring the beings of the Grand Bazaar into your game or bring your game to the Grand Bazaar. The stats guide is written as if it exists in the Grand Bazaar and has additional information, worldbuilding, and art. Lastly, there is also a coloring book that includes all the significant art from the book. Each page of art is backed with solid black so that you can use markers or other media that are prone to bleeding.

So what’s next for this world?
Before the first book was completed, I was already working on books two and three. The larger narratives of the Grand Bazaar will continue through the odd-numbered books, while the even-numbered books will be smaller self-contained books that focus on a specific event, character, subject, or story. Book two, The Completed Circle, will focus on one of the oldest (if not the oldest) fairy tales of that world and how it relates to the Grand Bazaar currently. The structure of the second book will be similar to the first book, and you are likely to encounter some familiar voices as well as new ones. Book three, In the Black, picks up where book one ended. I have a lot in store for book three, and it is sometimes hard to stay focused on book two. You can expect familiar voices and many new ones that I can’t wait to start writing. 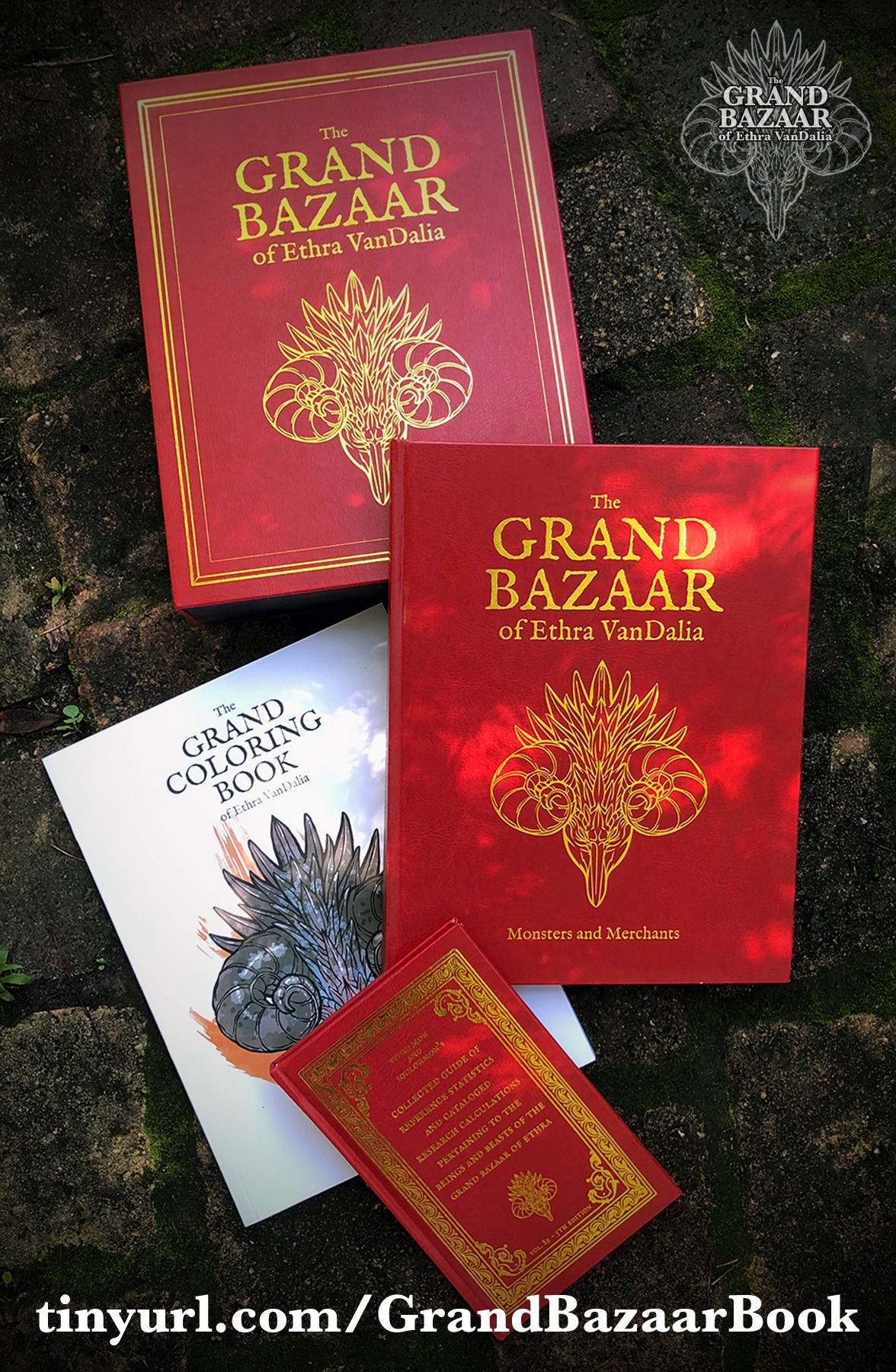