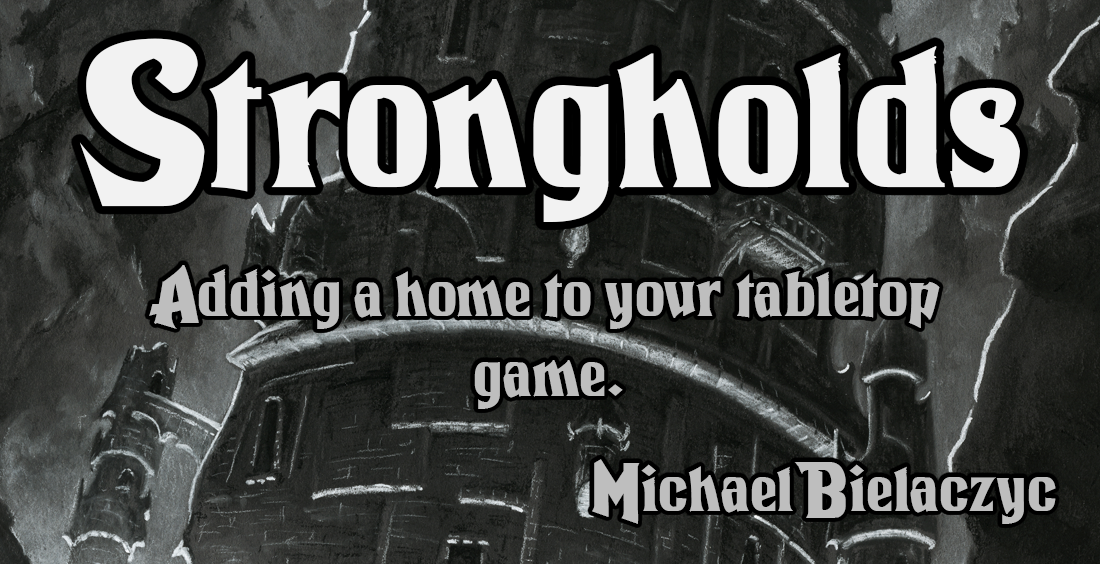 We all have fond memories of our first gaming experiences. Those first times reading through a book that opened up new worlds and allowed us to play in them. One of my strongest memories from my first Player’s Handbook (2nd Ed), was getting to the part where the rules say at a certain level you attract men-at-arms and that the adventurer needs a castle or stronghold to attract them. With that, 13 year old me grabbed some graph paper and immediately started planning my castle. My first character didn’t even have a Dungeonmaster, just me imagining his adventures. His name was Menion, after a character I loved in the Sword of Shannara, and the Castle of the Griffon came into being. It sat at a hill overlooking a valley that had a well traveled road going through it.

I carefully drew each room and its contents and planned how it would repel any incursion of orcs. It even spawned some research because young me wondered why an army would go up against a castle; why not just go around it? Back then finding answers often took much longer as the Encyclopedia Britannica we had did not have half the medieval history I wanted in its pages.

Later as I got older and became a Gamemaster for my friends, I always came back to the Stronghold. Dane’s character Macros had a floating citadel. My spelljammer group had the Farstar, a cozy but well armed Hammership. And when that group crash landed on Athas? They salvaged the ship parts and built a large caravan wagon to travel the dune seas. All of these stories I can see reflected in how I run my TTRPG  games. I always gave the players a place to call home, but I never really saw it until I was looking at new things to add to SagaBorn. But once it was revealed, I realized I already had a set of rules for Strongholds, I just never wrote them down. So here I am, writing them down with the goal I always have, add fun things to the table without over burdening the Gamemaster or the players.

When planning how the strongholds would benefit players, I had two goals: keep the rules simple and give ways to use bonuses. SagaBorn 1.5 uses Saga Points, a system of points that can be traded in to reroll any die roll. So giving players extra Saga Points for spending the night in the stronghold only made sense. Homes in real life are places for relaxation and rest, so bonuses to recovery made sense as well. Faster recovery from Horror and Ravaging are both included. Some rooms also have added bonuses, from Knowledge check bonuses to crafting discounts. The new rules have plenty of rooms to start with, but I am sure more will evolve over playtesting or even custom rooms at your own tables.

“Most players want to leave their mark on the world and creating a stronghold is a great way to do it.

Be it an old dungeon the players just pilfered or a new construction on a hill overlooking a city the players are fond of- strongholds add more to the downtime of the players. Creating a space that is solely theirs rather then hop between taverns and places layed out solely by the DM. A place to keep belongings safe, relics of adventures past. A place for the players to see familiar faces, bond with NPCs, a constant throughout campaigns and adventure paths.

In meatspace everyone wants a place of their own. It makes sense that players and Gamemasters would want one as well.” Aiden Walker, SagaBorn Designer and Strongholds Playtester

“Normally, a party jumps into a campaign, takes a job, follows a legend or some gossip toward treasure, is tasked with protecting or saving some people, or is given a challenge. They do that, then move to the next. Sometimes there’s a through line or even a full arc , but a stronghold adds a layer to it. We’re adventuring because we need to do that in order to build something that belongs to us. No matter what we do, in some way, it connects back to that. It gives some clarity of purpose.

It may not be for everybody, or for every campaign, though. Some groups might want to be travelers and explorers. They want to venture out and see new things, discover all the hidden wonders of the world, and so on. We’re tethered, to some degree, to our stronghold. We can travel a ways, but if we went too far or for too long, then we effectively abandon the stronghold. Both types of campaigns are fun (this is some of the most fun I’ve had), but they’re fundamentally different.

Campaigns with ships kind of bridge those types of gameplay. Like in StarBorn, your ship is essentially a stronghold that takes you on distant adventures.” Dane Clark Collins, SagaBorn Editor and Strongholds Playtester

The Gamemaster also benefits from a stronghold, giving a different focus to the campaign in many ways. The stronghold gives the players direct agency in the world. They can shape the area that they live in, hire allies, and make friends or enemies of their neighbors. Sooner or later this claimed land will raise the interest of other powerful people in the area. How does the local noble feel about this? The trade guild who now has a layover in the player run tavern? The hunters who used to see this as free land to hunt in. This all gives the GM fertile ground for adventures and scenes. This connection to the land can break the monotony of “murder hobo” adventuring. Overall, it just builds a richer world.

Speaking of rich, Sagaborn is a world where magic items are rare, so the players have little to spend their money on. The stronghold gives them something to spend that hard-won gold on. Building, upgrading, and upkeep a stronghold is not cheap, but should always be kept affordable.

Not every player or group will be interested in making or maintaining a stronghold, but if the group or even just one of the players does, it will create a lot of stories for all the players to enjoy. 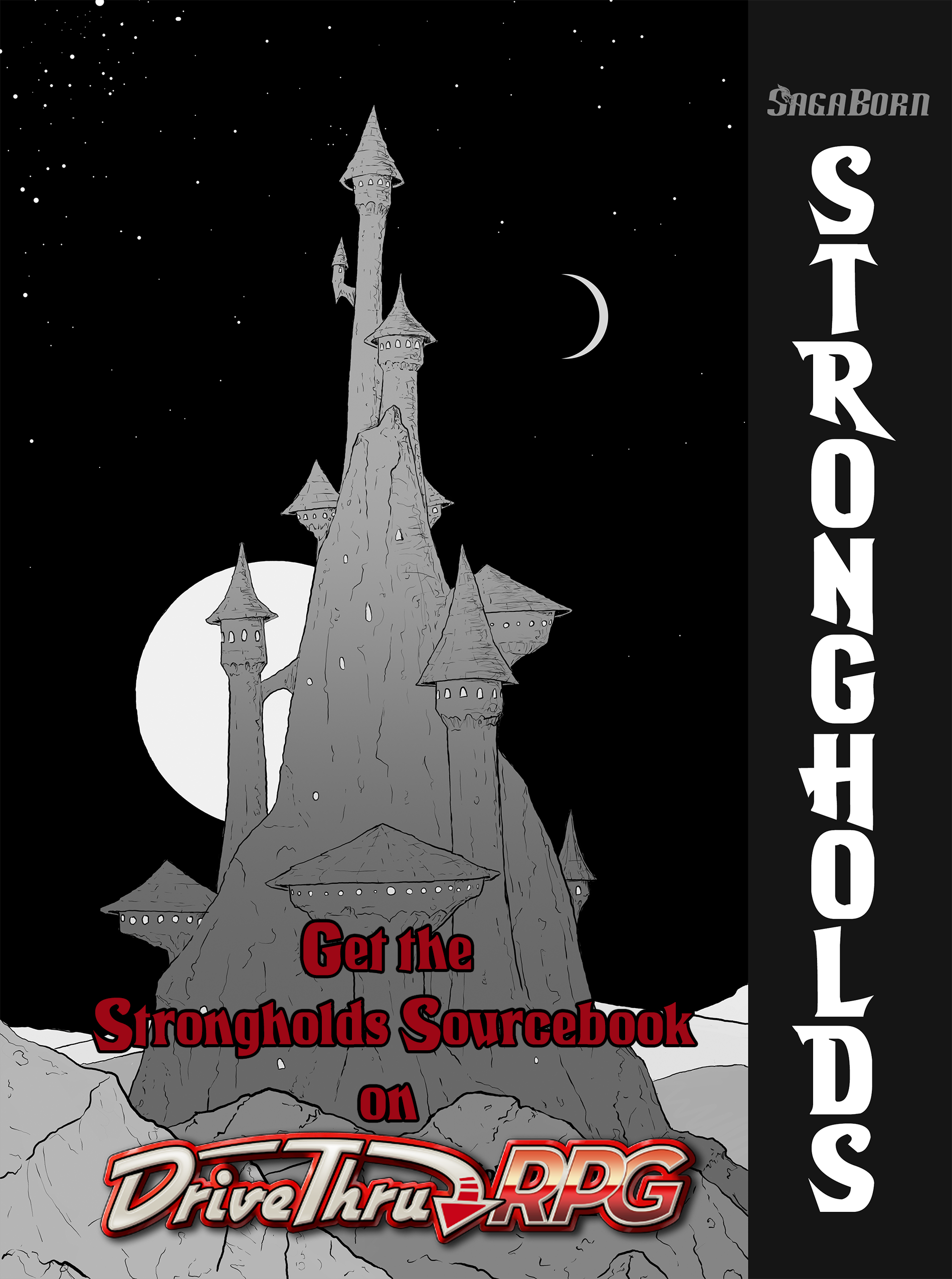